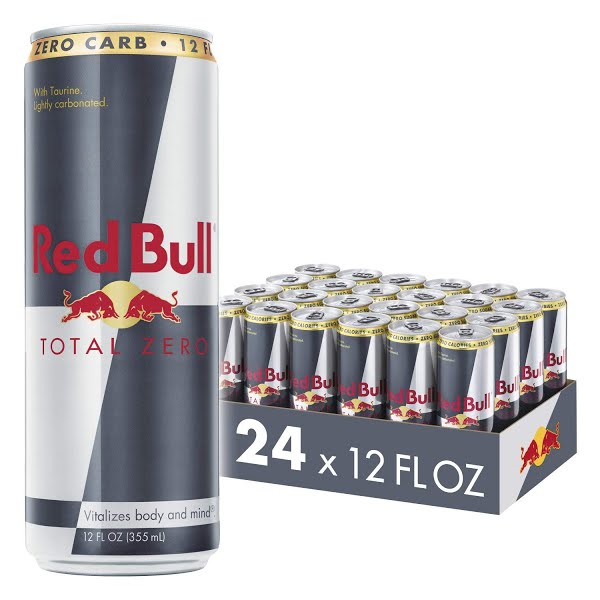 The “zero” doesn’t necessarily refer to carbs, either. While an 8.4 oz can of Red Bull Total Zero is labeled as 0 carbs, the label on the bigger 12 oz can claims 1 g of carbs. So what gives?

Manufacturers in the US report macronutrient content in whole numbers. That means that the Red Bull Total Zero's 8.4 oz can may contain as much as 0.4 g of carbs but still bear a "0 g" label.

Regardless of what the actual carb content is, we know it’s less than one, which means it’s keto-friendly. If you choose to enjoy a Red Bull Total Zero, you should err on the side of caution and count it as ~0.5 g of net carbs.

This labeling discrepancy is not unique to Red Bull Total Zero. Other zero-carb drinks, such as Bang, may also contain decimal-point carbs. We don’t have multiple serving sizes to compare.

Most of the carbs in Red Bull Total Zero come from aspartame, one of the non-sugar sweeteners used in the drink. Aspartame has the same carb content as sugar, but it’s almost 200 times sweeter. Red Bull Total Zero substitutes sugar with a much smaller amount of aspartame and passes the carbohydrate savings on to you.

Total Zero's other sweeteners include xanthan gum, sucralose, and acesulfame potassium, all of which are keto-friendly.

The big draw of Red Bull is the caffeine. Each can contains 80 mg, which is more than enough to wake you up, but weak by modern energy-drink standards. Here’s how it stacks up:

Red Bull Total Zero is surprisingly high in B vitamins. A single can contains 250% of your daily recommended intake of B6, which promotes good skin health, and 80% of your recommended intake of B12, which is critical for healthy brain function. Advertisements used to claim the added B vitamins would improve Red Bull drinkers’ concentration and reaction speed, but that isn’t true. A 2014 lawsuit forced the company to abandon the claims.

Red Bull Total Zero contains 1,000 mg of taurine, an essential nutrient that can protect the body from hypertension, one of the adverse effects of caffeine. A coffee drinker who experiences jitters or other symptoms may want to consider a taurine-added drink like Red Bull Total Zero.

Relative to foods like nuts and leafy greens, Red Bull Total Zero is low in nutrients. You should enjoy the drink in moderation, but don’t let your indulgence push out other, healthier carbs.